bhogaiśvarya-prasaktānāḿ
tayāpahṛta-cetasām
vyavasāyātmikā buddhiḥ
samādhau na vidhīyate
Translation
In the minds of those who are too attached to sense enjoyment and material opulence, and who are bewildered by such things, the resolute determination for devotional service to the Supreme Lord does not take place. 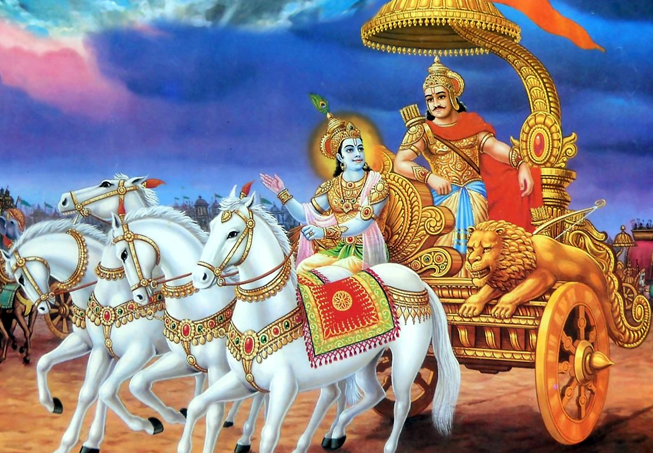 Purport
Sri Ramanuja
2.42 – 2.44 The ignorant, whose knowledge is little, and who have as their sole aim the attainment of enjoyment and power, speak the flowery language i.e., having its flowers (show) only as fruits, which look apparently beautiful at first sight. They rejoice in the letter of the Vedas i.e., they are attached to heaven and such other results (promised in the Karma-kanda of the Vedas). They say that there is nothing else, owing to their intense attachment to these results. They say that there is no fruit superior to heaven etc. They are full of worldly desires and their minds are highly attached to secular desires. They hanker for heaven, i.e. think of the enjoyment of the felicities of heaven, after which one can again have rebirth which offers again the opportunity to perform varied rites devoid of true knowledge and leads towards the attainment of enjoyments and power once again. With regard to those who cling to pleasure and power and whose understanding is contaminated by that flowery speech relating to pleasure and lordly powers, the aforesaid mental disposition characterised by resolution, will not arise in their Samadhi. Samadhi here means the mind. The knowledge of the self will not arise in such minds. In the minds of these persons, there cannot arise the mental disposition that looks on all Vedic rituals as means for liberation based on the determined conviction about the real form of the self. Hence, in an aspirant for liberation, there should be no attachment to rituals out of the conviction that they are meant for the acquisition of objects of desire only. It may be questioned why the Vedas, which have more of love for Jivas than thousands of parents, and which are endeavouring to save the Jivas, should prescribe in this way rites whose fruits are infinitesimal and which produce only new births. It can also be asked if it is proper to abandon what is given in the Vedas. Sri Krsna replies to these questions.

Purport
Sri Adi Shankaracharya
2.44 And vyavasayatmika, one-pointed; buddhih, conviction, with regard to Knowledge or Yoga; na vidhiyate, does not become established, i.e. does not arise; samadhau, in the minds — the word samadhi being derived in the sese of that into which everthing is gathered together for the enjoyment of a person –; bhoga-aisvarya-prasaktanam, of those who delight in enjoyment and wealth, of those who have the hankering that only enjoyment as also wealth is to be sought for, of those who identify themselves with these; and apahrta-cetasam, of those whose intellects are carried away, whose discriminating judgement becomes covered; taya, by that speech which is full of various special rites.

The opinions of those who are not resolute are contrary to the Vedic scriptures; but the summations of those who are resolute possessing spiritual intelligence are never contrary to the Vedic scriptures. Arjuna may query why the Supreme Lord speaks about things providing pleasures of heaven, this is clarified by the Supreme Lord in this verse. In verse 42 beginning yam to the word taya in verse forty-four it can be ascertained that if salvation is the fruit then any heavenly pleasures are merely the flowers.

Those who revel only in the words of the Vedas are known as Vedavad ratah. They speak only of revelling in the pleasures derived from actions. Those who speak about the Vedas in expectation of fruits are said to revel therein and thus they are motivated by desire. The essence and the objective of the Vedic scriptures is knowledge of the Ultimate, which is the Supreme Lord, who is very pleased by those who are devoted to Him. The instructions and injunctions within the Vedic scriptures should be known to be applicable solely to the Supreme Lord and no other. It is the knowledge of the Supreme Lord that is to be sought and understood. This is what is to be achieved by all living entities to make their life in the material existence successful.

In reference to those pursuing the goals of opulence and pleasure and in reference to the means of acquiring those fruits thereof, these vedavad ratahs declare that this is knowledge of Vedanta. For these persons spiritual intelligence and comprehensive discrimination does not manifest itself in the form of an equinanimous intellect. Only those in whom spiritual intelligence has awakened have comprehensive knowledge of the Supreme Lord and the total satisfaction of mind and senses that accompanies it. Verily this is the means for salvation. It is also specifically mentioned in the Srimad Bhagavatam known also as the Bhagavat Purana.

Not for these vedavad ratahs is the realisation of the Ultimate Truth spoken of in the Vedas in all their entirety. For whom realisation does not dawn that the empirical world is similar to the perception of the world seen in the dream state? In whom then does exist this irresolute intelligence? In those who listen to the words of those without spiritual intelligence? When one’s consciousness is abducted by speculative schemes stemming from fruitive desires it is not possible for satisfaction of the mind to manifest.

Factually as things are, similar is the spiritual intelligence. Knowledge which is distorted, similarly is that satisfaction derived from such knowledge distorted. Spiritual conceptions do not arise in minds which are influenced by distorted knowledge. In these minds only a material conception of heaven and heavenly pleasures can be somewhat envisioned; but not the understanding that the Supreme Lord is actually the controller of all the worlds and the bequeather of all blessings and that only by serving Him, by His grace and only by His grace can all living entities attain salvation. Those living entities who adhere to the Vedic scriptures for the purpose of enjoying material pleasures and acquiring wealth and opulence, perform repeated acts of ritualistic sacrifice which while bestowing their material rewards in future lifetimes become the cause of an endless repetition of birth and death in the material existence.

In the Atharvana scripture it is stated:

The living entities who being are influenced by such words, doctrines and philosophies which are contrary to the Vedic scriptures, consider that the pursuance and fulfilment of desired objects is the purpose of life and nothing else is superior to this, are most certainly deluded. Enjoying whatever pleasures they have managed to manipulate for themselves they are repeatedly born again and again cast down into the material existence or depending upon the method of how they acquired their material opulence even hurled down to be born in animal species or in the hellish worlds.

One should therefore not become a victim and become prey to those being heretic or devious, who think and act contrary to the spiritual knowledge of the Vedic scriptures which are revealed in the best interest and highest good of every living entities in all of material existence.

Those living entities who perform comprehensive sacrificial activities prescribed by one in the authorised line of disciplic succession for the satisfaction of the Supreme Lord Krishna; but who are in reality opposed to His supremacy; even if they have not acquired any demerits, even if they have satisfied their preceptor with gifts, even if they have manipulated themselves to attain some fleeting pleasures in the heavenly realms; still when whatever merit they have acquired is exhausted they will sink back down into worlds of darkness. Others who remain inimical to the Supreme Lord Krishna and who are inimical to the spiritual knowledge revealed in the Vedic scriptures go directly to the worlds of darkness at the death of their physical body without enjoying any of the heavenly realms.