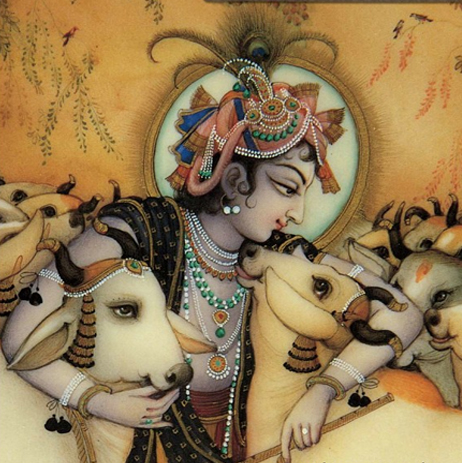 Bhagavad Gita Chapter 11: Krishna proves Himself as the Supreme Lord and He establishes the criteria that anyone who claims to be Godhead must also show a Universal Form. Krishna gives Arjuna divine eyes and then reveals His wondrous, effulgent, all-expansive form, and Arjuna sees all soldiers being devoured by His flaming mouth because at that time he was manifest with terrible, scorching rays. Krishna explains His form as time, the destroyer of worlds, and requests that Arjuna, knowing in advance the inevitable of all the warriors, becomes His instrument. In answer to Arjuna’s fearful prayers, Krishna first shows His four-armed form and then returns to His original two-armed form. Krishna then states that his two-armed form can only be seen by those offering pure devotional service, those who work for Him, who make Him the supreme goal of life, who is friendly to every living being---he certainly comes to Him.

Arjuna said: By my hearing the instructions You have kindly given me about these most confidential spiritual subjects, my illusion has now bee...View More

O lotus-eyed one, I have heard from You in detail about the appearance and disappearance of every living entity and have realized Your inexhaustible glor...View More

O greatest of all personalities, O supreme form, though I see You here before me in Your actual position, as You have described Yourself, I wish to see how...View More

If You think that I am able to behold Your cosmic form, O my Lord, O master of all mystic power, then kindly show me that unlimited universal Self.

O best of the Bharatas, see here the different manifestations of Adityas, Vasus, Rudras, Asvini-kumaras and all the other demigods. Behold the many ...View More

O Arjuna, whatever you wish to see, behold at once in this body of Mine! This universal form can show you whatever you now desire to see and whatever ...View More

But you cannot see Me with your present eyes. Therefore I give you divine eyes. Behold My mystic opulence!

Sanjaya said: O King, having spoken thus, the Supreme Lord of all mystic power, the Personality of Godhead, displayed His universal form to Arjun...View More

If hundreds of thousands of suns were to rise at once into the sky, their radiance might resemble the effulgence of the Supreme Person in that universal ...View More

At that time Arjuna could see in the universal form of the Lord the unlimited expansions of the universe situated in one place although divided into many,...View More

Then, bewildered and astonished, his hair standing on end, Arjuna bowed his head to offer obeisances and with folded hands began to pray to the ...View More

Arjuna said: My dear Lord Krishna, I see assembled in Your body all the demigods ...View More

O Lord of the universe, O universal form, I see in Your body many, many arms, bellies, mouths and eyes, expa...View More

Your form is difficult to see because of its glaring effulgence, spreading on all sides, like blazing fire...View More

You are the supreme primal objective. You are the ultimate resting place of all this universe. You are inexha...View More

You are without origin, middle or end. Your glory is unlimited. You have numberless arms, and the sun and moon a...View More

Although You are one, You spread throughout the sky and the planets and all space between. O ...View More

All the hosts of demigods are surrendering before You and entering into You. Some of them,...View More

All the various manifestations of Lord Shiva, the Adityas, the Vasus, the Sadhyas, the Visvedevas, the...View More

O mighty-armed one, all the planets with their demigods are disturbed at seeing Your great form, wi...View More

O all-pervading Vishnu, seeing You with Your many radiant colors touching the sky, ...View More

O Lord of lords, O refuge of the worlds, please be gracious to me. I cannot keep my balance seeing thus Your blazing...View More

As the many waves of the rivers flow into the ocean, so do all these great warriors enter blazing into Your mouths.

I see all people rushing full speed into Your mouths, as moths dash to destruction in a blazing fire.

O Vishnu, I see You devouring all people from all sides with Your flaming mouths. Covering all the universe with Y...View More

O Lord of lords, so fierce of form, please tell me who You are. I offer my obeisances unto You; please be gracious to m...View More

The Supreme Personality of Godhead said: Time I am, the great destroye...View More

Therefore get up. Prepare to fight and win glory. Conquer your enemies and enjoy a flourishing kingd...View More

Drona, Bhishma, Jayadratha, Karna and the other great warriors have already been destroyed ...View More

Sanjaya said to Dhritarashtra: O King, after hearing these words from the Supreme Person...View More

Arjuna said: O master of the senses, the world becomes joyful upon hearing Your name, and thus e...View More

O great one, greater even than Brahma, You are the original creator. Why then should they not offer their respectful ...View More

You are the original Personality of Godhead, the oldest, the ultimate sanctuary of this manifested cosmic wo...View More

Obeisances to You from the front, from behind and from all sides! O unbounded power, You are the master of limi...View More

You are the father of this complete cosmic manifestation, of the moving and the nonmoving. You are its worshipabl...View More

You are the Supreme Lord, to be worshiped by every living being. Thus I fall down to offer You my respectful o...View More

After seeing this universal form, which I have never seen before, I am gladdened, but at the same time my mi...View More

O universal form, O thousand-armed Lord, I wish to see You in Your four-armed form, with helmeted head and with ...View More

The Supreme Personality of Godhead said: My dear Arjuna, happily have I shown you, by M...View More

O best of the Kuru warriors, no one before you has ever seen this universal form of Mine, for neither by st...View More

You have been perturbed and bewildered by seeing this horrible feature of Mine. Now let it be ...View More

The Supreme Personality of Godhead said: My dear Arjuna, this form of Mine you are nowseeing is very difficult to behold....View More

The form you are seeing with your transcendental eyes cannot be understood simply by studying the Vedas, nor by undergoing serious penances, nor...View More

My dear Arjuna, only by undivided devotional service can I be understood as I am, standing before you, and can thus be seen directly. Only ...View More

My dear Arjuna, he who engages in My pure devotional service, free from the contaminations of fruitive activities and mental speculation, he wh...View More